Welcome to my collection of 1:12 scale miniature food made with love (and polymer clay) - for dollhouses or admirers of all-things-mini.

In life, it's the small things around you that matter the most. Embrace, enjoy, and savor every second with all your might.

Vegetable Soup made with Homemade Stock

The thing I'm learning about sculpting miniature foods is, it helps to be a cook and a baker (in real life). Knowing how the foods look when raw, cooked, and in the process of preparation, helps in mixing the colors and achieving the right gloss and matte finish for each food item. The details are extremely important, right down to the corn cob with some of its kernels sliced off. I've baked more hams than I care to count and I'm familiar with that just-out-of-the-oven appearance - like how the juices run when you place the well-baked ham on a platter. And the cloves I randomly place in the outer layer of the ham - my little secret here was to use poppy seeds for a similar effect. The cabbage - I tried to make it look "wet" - like it was freshly washed. In the end, I think I got the look I was trying for - a preparation area complete with a dutch oven and overflowing soup bowl filled with the most delicious, made-from-scratch homestyle vegetable soup brimming with the freshest ingredients from the garden. The recipe was inspired by my brother-in-law, so I'm tipping my hat to him on this one. It's one hearty soup for a chilly late winter's day. Enjoy! 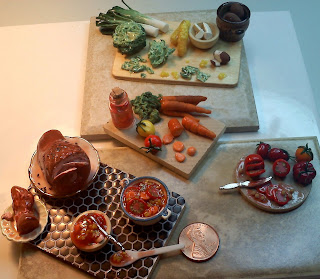 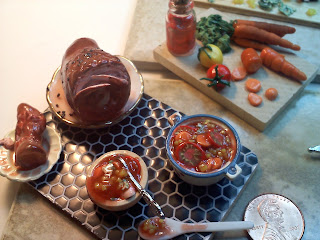 Soup's on! Grab a spoon!
﻿ There is a secret ingredient in this soup that my BIL swears by....it makes the broth a little richer and cuts some of the acidic bite of the tomatoes. Can you guess what that ingredient might be? (It's not pictured very clearly here in the Dutch oven, so you'll have to wing a guess on this one). Good luck!
﻿
Posted by Jackie at 4:40 PM No comments:

Every year, I can't wait for spring. My warm weather radar kicks into gear around the first of January (snow is always a major bummer - it hijacks my dreams of sunny days and butterflies and yanks me back to the reality of the calendar). So here I've tried to replicate a springtime inspired breakfast, with fresh strawberries and Red River grapefruit on the side. I'm still on the learning curve, trying to work on making "tea" look like..well...tea. And refining my colors to match the hues of baked croissants with melting butter on top, and fried bacon (I think mine needs a little more fat, don't you?) that just came out of the frying pan. And maybe next time, I'll go easy on the pepper on the eggs. The beauty of miniatures, is truly in the tiny details. I'm working on it. 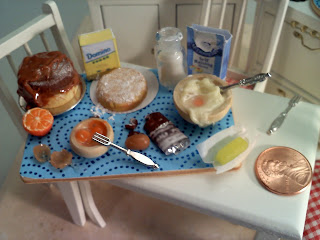 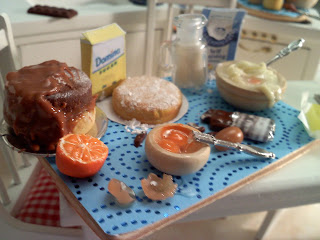 Here we have another busy kitchen scene - everything's here - eggs...flour...butter....sugar....and milk. Check. And a dash of fresh orange juice for the frosting! Mmmm... 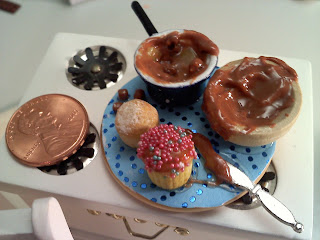 Let's add a few vanilla cupcakes to the party.....with lots of sprinkles of course.
Posted by Jackie at 5:03 PM No comments: 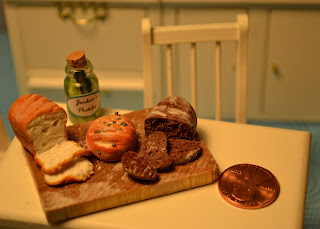 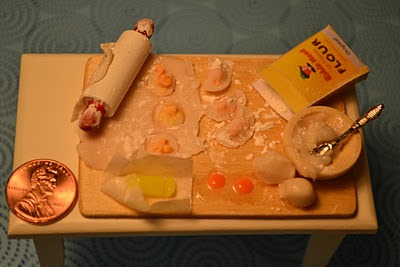 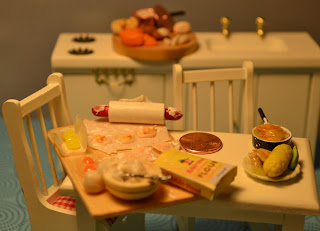 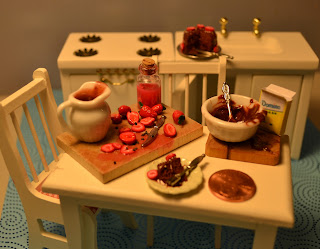 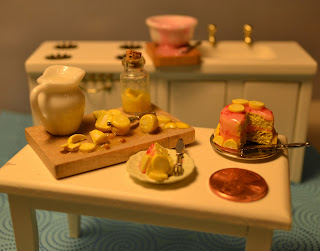 Jackie
I love to cook, and I love clay. So I combined the two passions and started making miniature foods from polymer clay for my children's dollhouses. It's a great way to spend time with them.